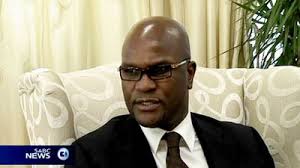 “For far too long our heritage landscape has been viewed through the prism of our colonisers and we have got to challenge that,” he said.

It’s not PC to point this out these days but the Bantu groupings (tribes, if you will) are later colonisers of this part of what is now South Africa than the various white groupings are. From Western Cape around to the Fish River (flowing into the Indian Ocean) is an area where the Bantu agricultural package simply doesn’t work. So the expansion from West Africa over the couple of millennia, all the way down Africa, rather stopped at the northern borders of this area. The Hottentots, as they were called back then, were left in possession: until the European agricultural package turned up with the Dutch and English by sea.

Further north, in Natal and so on, yes, fair enough to call the whites the most recent colonisers. And for the Hottentots (now, Bushmen? I Kung!? Forgotten the current PC name, sorry) to call the whites colonisers is also entirely accurate in the Cape. But the Bantu themselves are colonisers and they’re later ones of this area, the Cape than anyone else is.

Just to be accurate here, The Bantu expansion is largely similar to, say, the Celtic one across Europe. Iron Age, with a decent agricultural package (umm, yams, or sweet potatoes, rice, plantains maybe? as opposed to the Celtic wheat and deep ploughing) expended over the generations into new territory. Engulfing the hunter gatherers who previously lived in those regions. Pretty much all of sub-Saharan Africa sans the Ethiopian Highlands (different food package) and the Cape. And it all occurred rather late on. A Gentleman of, say, the Zulu, Tiswana and so on persuasion is no more a native of this area, the Cape, than someone called Cronje is, perhaps less.

Not PC to point all of this out though.

56 thoughts on “Amusing in South Africa”