If only the political economist could understand a GDP report

Second, the V shaped recovery that Andy Haldane of the Bank of England likes to talk about does not exist; not that I ever thought it did. 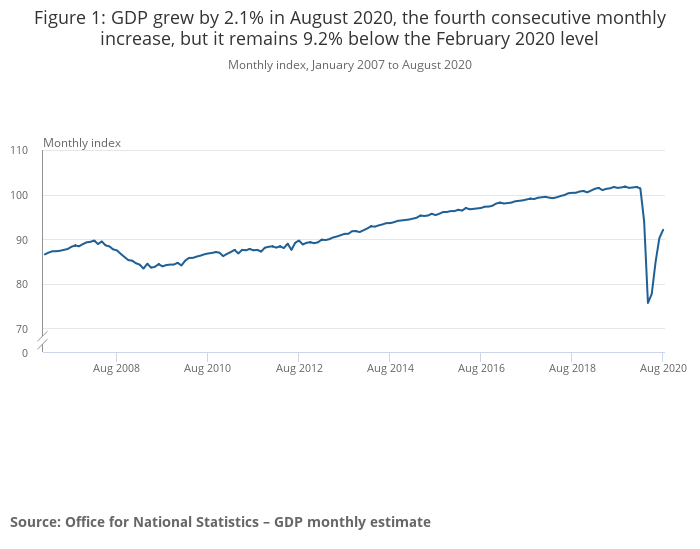 Dunno really, Looks vaguely V-ish to me but then what do I know?

Erm, that’s 2.1% in a single month. Not at an annualised rate, but in toto. Leaving aside, for a moment, everyone else’s recoveries from recent lockdown that, umm, about as fast or faster than any economy has grown, ever. Keep that rate up and we get (remember, compounding) something like 30% GDP growth in a year. Pretty cool really.

Much of the rest resulted from the assumption that those in education were working again. Knock those two apparently virus spreading sectors out of consideration and the rest of the economy remained more than 9% below its previous crisis level.

No, the economy as a whole is still 9% below. It actually says so:

the level of output has not fully recovered from the record falls seen across March and April 2020, and is still 9.2% below the levels seen in February 2020,

Further, we shouldn’t try to dismiss the effect of education. For the reason that the UK had a larger recession than anyone else is because we’re the only people who counted the absence of education (and health care) as part of the recession in the first place.

Jeez, can’t he even read the reports that are the basis of pontifications about economics?

previousAhh, so that’s how they’re going to get out of it
nextJust to calculate this poverty thing